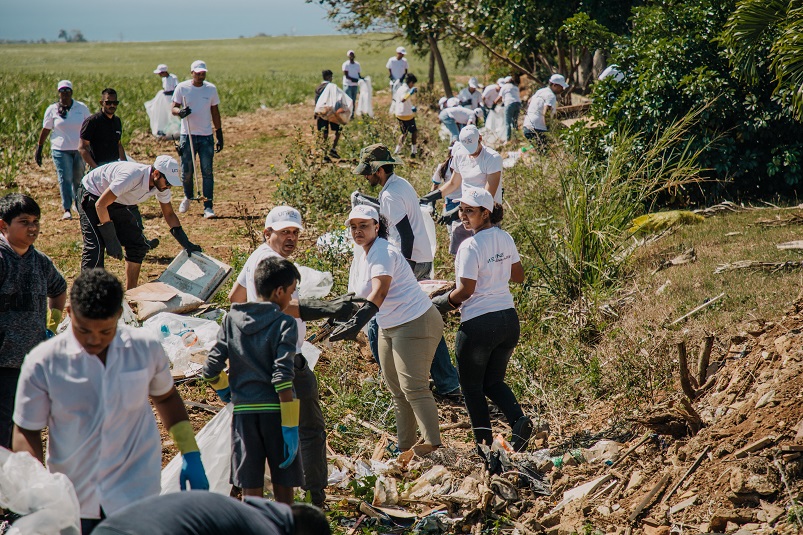 For the World Cleanup Day and for the second consecutive year, Fondation Medine Horizons (FMH), with the support of Medine Volunteers, organised a cleaning and sensitisation event on Friday 27th September in Barkly. This year, the Medine Volunteers teamed up with students of Barkly Government Primary School and Marcel Cabon State Secondary School (SSS) for a thorough cleanup of a plot of land, filled with garbage, located on Antoine Chavreemootoo road in Barkly. Were also present at this clean-up campaign: Céline Guillot-Sestier, Head of Group Communications and CSR of Medine Group, the Rector of Marcel Cabon SSS as well as two officers of the Environmental Police Division. They addressed the critical importance of maintaining a clean environment to protect our planet, and for future generations. Medine Group also donated to the community of Barkly a garbage container which is soon to be installed on the site. At the end of the intensive half-day clean-up, teams had collected a volume of waste of all sorts equivalent to the three waste collection trucks specially sent to the site by the Municipality Beau Bassin/Rose Hill.

World Cleanup Day took place this year on 21st September. This waste collection campaign, which is now a worldwide annual event, mobilises millions of citizens across the planet for a dedicated day’s fight against environmental pollution. Medine, who joined in the world event last year with a team of a hundred willing participants from the Group, decided to renew the clean-up initiative this year with the support of Medine Volunteers. Medine Group’s World Cleanup Day 2019 campaign was set for 27th September on a waste-strewn site in Barkly.

This year, Medine Group invited representatives of the environmental authorities, local administration and Barkly residents to take part in this campaign and to team up with its volunteers for a thorough clean-up of the site earmarked with the view to rehabilitating this plot of land. Medine Group also symbolically donated to the community of Barkly a refuse collection container which will be installed on the site this very week to keep the place clean and sustain a long-term positive impact.

Barkly Government Primary School and Marcel Cabon SSS delegated 45 students of Grades 6 to 8 classes, and their respective teachers to join the initiative. They all actively and cheerily invested themselves in filling up the trash bags that had been offered for the waste collection event by the Ministry of the Environment and Artemis Archery Club. Two officers of the Environmental Police Division also joined in to explain the simple measures that can be applied daily to minimise environmental pollution and thereby have a positive impact on the health of the residents of the region.

Céline Guillot-Sestier, Head of Group Communications and CSR of Medine Group, put forward that: – « It is a real joy to note the enthusiasm with which Barkly Government Primary School and Marcel Cabon SSS have teamed up with Medine Volunteers for Medine Group’s World Cleanup Day 2019 campaign. As this special event brings together teachers and officers of the Environmental Police Division, it is ideal to sensitise these students about the negative effects of environmental pollution. It is also the opportunity for Medine employees and environmental officers to exchange with inhabitants of the locality towards implementing solutions to avoid persistent pollution. We hope that the refuse collection container which Medine Group will install on the site during the week maintains the keep-it-clean drive and helps in maintaining the place in a state of cleanliness that will benefit the residents of this area of Barkly. »

For recall, Medine’s World Cleanup Day initiative in September 2018 mobilised a hundred Medine Volunteers, from various clusters, who collected and sorted 12 tonnes of waste along A3 road in Bambous and in La Valette. In July 2019, Fondation Medine Horizons, in collaboration with Black River District Council, organised a second clean-up campaign on La Valette roads to support to the « Mega Cleanup and Embellishment Campaign » initiated by the authorities.

To be noted that Medine Group’s third clean-up campaign records a volume of collected waste that remains heavy: three full truckloads of trash bags filled with all sorts of garbage.