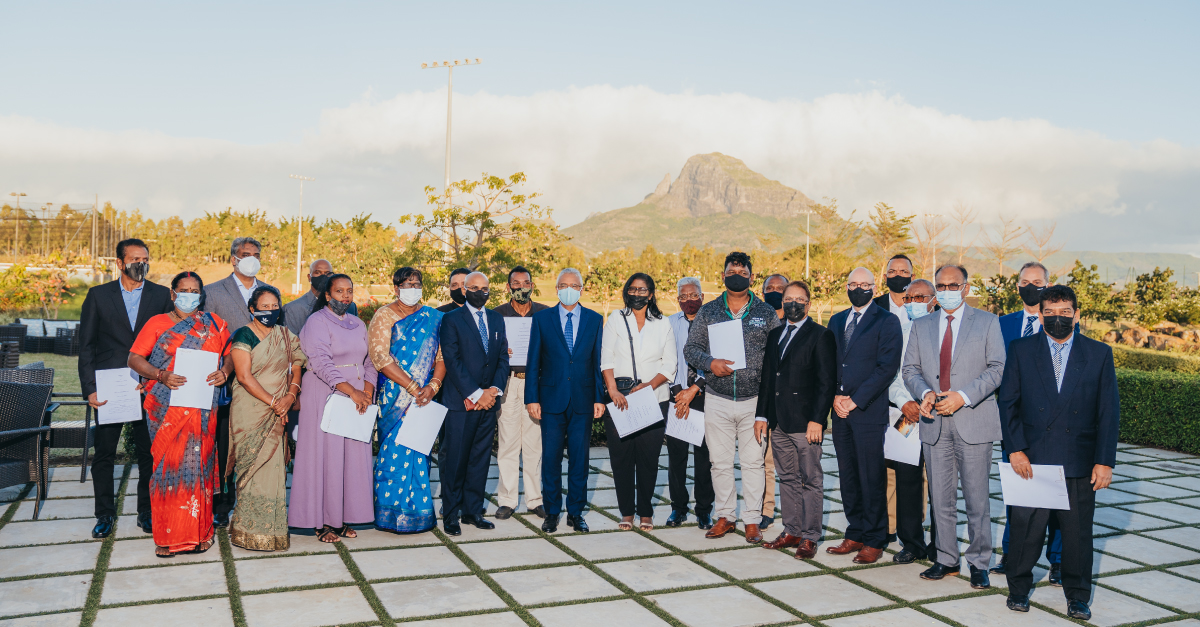 Fifteen former Medine employees who opted for Voluntary Retirement Scheme (VRS) for the Bambous site, received their title deed during a symbolic ceremony held at the SPARC Sports and Medical Centre on Monday 16th of August. Out of the 151 new beneficiaries, 15 were presented their title deeds by the guest of honour: the Prime Minister, Minister of Defence, Home Affairs and External Communications, Minister for Rodrigues, Outer Islands and Territorial Integrity, Mr. Pravind Kumar Jugnauth. Amongst the personalities present for the occasion: the Minister of Land Transport and Light Rail, Minister of Foreign Affairs, Regional Integration and International Trade, Mr. Alan Ganoo ; the Attorney-General, Minister of Agro-Industry and Food Security, Mr. Maneesh Gobin, and other government representatives. Mr. Ludovic Labeauté, Chairperson of the Black River District Council, and Mr. Satish Parmessur, CEO of the Mauritius Cane Industry Authority (MCIA) were also in attendance at the ceremony, organised and held in accordance with all current sanitary protocols and measures.

The remaining beneficiaries to collect their respective title deed as from Tuesday 17th of August.

‘We are proud and delighted to officially hand over the title deeds to 151 former employees of Medine’s Agriculture department. This is a major milestone for the beneficiaries of the VRS 4 scheme and we wanted to pay tribute to their contribution to the sugar cane industry and to the Mauritian economy as a whole. We commend the Government’s efforts and the reforms implemented to support the industry. The VRS is the perfect embodiment of the relevance and the importance of public-private partnership to the benefit of the population,’ highlighted Dhiren Ponnusamy, Medine’s Chief Executive Officer (CEO) in his address.

The Prime Minister lauded the beneficiaries’ hard work during their years of service at Medine and strongly emphasized their overall contribution to the socio-economic progress of the country. In his speech, he recalled that back in 2001, in view of the structural threats and challenges, the sugar cane industry had to undergo a reform to survive. In the same vein, the Prime Minister asserted that public-private partnerships are an inherent condition of economic development.

Didier Charoux, Managing Director of Medine’s Agriculture Department congratulated the happy new owners. ‘Today we are gathered to show our gratitude and to reward the hard work and dedication of all those men and women who have played a key role in our country’s economic development,’ he said.

Medine’s Agriculture department, historically linked to sugar cane, brings together several sectors of activity ranging from the production of sugar cane to the cultivation of plants, fruits, and vegetables. With nearly 40% of land devoted to agricultural activity, the Agriculture department plays a pivotal role in the development of Medine’s landbank. Over 3,400 hectares of land are allocated to sugar cane cultivation and some 200 hectares to fruits and vegetables, with an average production of 300,000 tons and 4,000 tons respectively.

Located at the entrance of Medine’s agricultural department, the Bambous VRS site is equipped with all the necessary facilities and infrastructure, namely: a road network, drains for the evacuation of wastewater, access to water and electricity, green spaces, and a pétanque court. A bus lay-by has also been installed, as well as traffic lights at crossroads.

Sylvio Badul, one of the 151 beneficiaries and recent proud owners of a plot of land of 7 perches says: ‘I am overjoyed and proud to receive my title deed. I wholeheartedly thank the Medine family and the MCIA for making this day a reality. Through my 39-year career as a Medine employee in various departments, from driver to working in the offices, Medine has been a university of life. I was also a member of the football team and we have, on numerous occasions, defended Medine’s colours.’ This feeling of joy is shared by Deobaruth Naiko who counts 40 years of service and now plans to make this new family heritage particularly beneficial to his children. ‘Nowadays, owning a plot of land is no easy task. As such, I am delighted and proud to be a property owner,’ he said. Rama Taliamah, for her part, shares pride in her journey which started as a manual worker before moving up the career ladder. ‘Now that I own a residential property, I know I can offer my children a lasting legacy!’