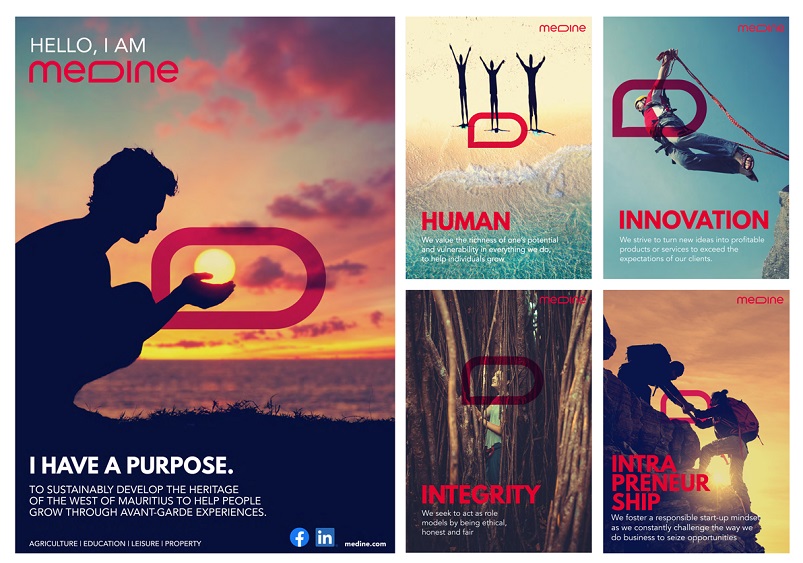 Medine Group has just unveiled its brand-new visual identity, marking a new significant milestone in its history. The new positioning of the Group, which stands as a spearhead of the West coast’s development, derives from the in-depth restructuring process that has been ongoing within Medine in less than two years. In this context, an exercise was undertaken to come up with a fresh definition of the Group’s mission and values, aligned with its restructuring. Resolutely modern, dynamic and connected to the West coast, the new visual identity that results from this exercise has been designed to reflect Medine Group’s freshly coined mission and values as well as the stimulating impetus that is running since recently through the Group. Thierry Sauzier, CEO, together with the teams who are going to lead the employee engagement program in regards to the new mission and values, met the various teams within the whole Group. The objective of these meetings was to share with the teams Medine’s vision for each of its activity sectors, the Group’s new mission (or purpose) statement and the pillars upon which it rests – notably its four core values, prior to unveiling of the new logo and deriving graphic collaterals which constitute Medine Group’s brand positioning henceforth.

“To sustainably develop the heritage of the West of Mauritius, to help people grow through avant-garde experiences”, such is the new mission statement of Medine Group that Thierry Sauzier, CEO, has been sharing early October, during dedicated meetings organised with all of the Group’s teams.

The coining of the new mission statement derives from the restructuring process that has been ongoing within the Group over the past near two years. This implied a change in enterprise culture, restructuring capital and operational assets, strategic review of all activities – which was undertaken across the Group’s clusters.

The drive for positive change however brought in its wake, difficult but essential decisions, such as closing down the sugar mill, which meant closing a significant page of the history of Medine. To rise up to modern day challenges whilst remaining consistent with the pioneering spirit, which had been its trademark for over a century, Medine had to focus on successful accomplishments and review its model thoroughly.

Throughout the Group, all teams rose to and met the challenge of necessary change, witnessing the creation of new dynamics and synergies – as confirmed by the encouraging financial achievements recorded by Medine for 2018-2019 financial year, notably Rs 269 million profit, which means a Rs 1,1 billion improvement as compared to the previous year.

In fewer than two years, Medine’s different clusters, namely Agriculture, Education, Leisure and Property, accomplished more than 40 major projects for the development of the West coast. Among these, several launches : Uniciti, Middlesex, MCB IF, SPARC sports centre, Cascavelle new foodcourt, Fondation Medine Horizons’ social centre, Tulawaka and Thrill Mountain of Casela NatureParks, Yemen Experience eco-activities, inception of works for Uniciti’s Magenta Park, delivery of Henrietta’s solar farm, implementation of ecological packaging for a significant part of Jardins de Medine’s range of produce. Other noteworthy accomplishments, among others, are the restructuring of the Group’s debt, Medine’s listing on the SEM and the buy-back of Concorde.

During this October’s meetings with the teams across the different clusters of the Group, Thierry Sauzier, CEO, expressed his pride for the work they had accomplished over the few past months. “Medine would never have accomplished so much, had it not been for each and every team member’s efforts. The work that has been achieved over these past months is huge and has laid the foundations for a sustainable future. We can all be proud of these realisations, which allow Medine to move forward confidently on sound grounds and also to look forward to upcoming outstanding projects.”

Thierry Sauzier also put forward that the restructuring process has not wiped out the past but, on the contrary, highlighted Medine’s strengths. “We have reviewed the model to improve it, to perfect it – not to erase it. It is from building on our history and our expertise that we have evolved. To sustain this change we need to ground it in our values and this is why it was important to redefine Medine Group’s mission.”

The in-depth work carried out throughout Medine is what has led us to redefine the Group’s purpose, leveraging our strengths and know-how. This mission statement will guide each of its activity clusters, which are Agriculture, Education, Leisure and Property.

To make sure that this mission is part of all decisions taken by the company and expressed in the daily work of every team member, Medine also had to define a new set of values that would underpin and steer its purpose.

INNOVATION. HUMAN. INTRAPRENEURSHIP. INTEGRITY. These are the four values which are henceforth the cornerstones of Medine’s action; they will nurture a new enterprise culture, as they will be deployed throughout the Group by Olivier Brousse, Chief Transformation Officer. His attributions are to gear all of Medine’s employees to manifest agility and leadership so that each and every one can succeed in meeting the challenges they are confronted to in their respective sector of activity.

The new mission and values are in line with the Group’s restructuring and, to reflect this momentum, Medine’s visual identity has also been redesigned.

Thierry Sauzier believes that this new identity reflects the drive that is now running through Medine. “Resolutely modern, dynamic and fully connected with the western region, this new visual identity has been designed to express the new mission and values of the Group as well as the stimulating impetus driving Medine forward.”

The October’s meeting with all of Medine’s employees also mark the launch of an internal and external communication campaign, as well as that of workshops organised, for the employees of the Group, around the new mission and values. During the meetings, Marc Desmarais, Head of Human Resources, emphasised that these values workshops, which are going to be rolled out over the next few months, will engage all employees to participate fully in the development of Medine. Several pivotal events are foreseen during the year to bring these values to life and sustain the continuous engagement of employees.