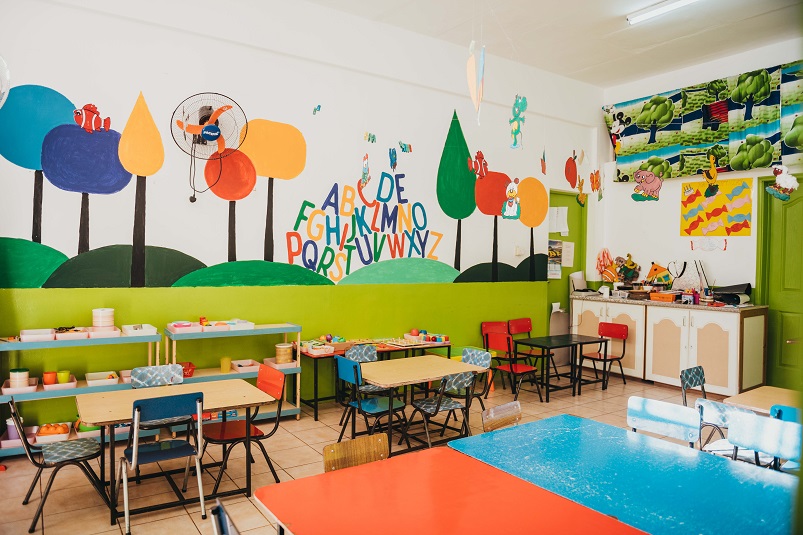 Caritas’ Centre d’Éveil de Saint Sauveur – dedicated to early childhood awakening, is housed on the grounds of its namesake church in Bambous. This Tuesday 30th April afternoon, it witnessed an unusual effervescence as the kindergarten was being taken over by some fifteen employees of Medine Group, for a noble cause. Indeed, these Medine Volunteers had taken up the challenge of embellishing, over the afternoon, this early childhood awakening centre managed Caritas, which welcomes daily 26 two-year old children. Meanwhile, the young occupants had been offered an excursion at Casela World of Adventures, under the joint supervision of the park’s volunteering personnel and their own educators. Meanwhile, with the view to offering them a pleasant surprise at their return, Medine Volunteers enthusiastically tackled the repainting of the nursery, prior to redesigning its reading corner and revamping the whole space with a multitude of new toys – offered by Fondation Medine Horizons, as well as generously donated by Medine Group employees.

Medine Group believes in education as a fundamental engine for development and supports, in the western region, through Fondation Medine Horizons, several initiatives which aim to promote education in all its forms and at all ages. Medine Volunteers – a programme established since several years, and Fondation Medine Horizons are part of Medine Group’s initiatives to implement concretely one of its core principles, notably that sustainable development can only be effective if it is geared by an inclusive and collaborative approach. This is demonstrated by the joint actions of Fondation Medine Horizons and Medine Volunteers which, on a near-monthly basis, bring together the foundation’s team and the Group’s employees to carry out a planned activity.

ACT. GIVE. FUND. – Such are the pillars upon which rests the foundation’s action plan. In this context, Medine Volunteers are called upon for donations, financial support and to engage in activities for the benefit of vulnerable communities of the region, and at national level also.

This week, Fondation Medine Horizons’ project was to embellish Caritas’ Centre d’Eveil de Saint Sauveur in Bambous. The objective was to uplift this early childhood awakening centre, which acts as a day-care centre for young kids of the region. The means dedicated to this end were: a revamping of the premises, the provision of new educational material to the educators together with new reading books and toys for the children. To crown it all: a convivial get-together was planned with the latter’s parents.

Céline Guillot-Sestier, Medine’s Head of Group Communications and CSR, attending the event, put forward that: – « Caritas does a remarkable work with these young ones daily. Medine Group’s wish was to give a boost to this effort. We are, yet again, very proud to note the positive response of our teams in supporting this endeavour. We hope, thereby, that the centre’s educators, attendees’ parents and the children benefitting from it as well as their parents will see in the centre a motivating space where young ones can keep blooming under the admirable educational support offered by Caritas. »

The day’s programme brought together, on Medine Group’s part, some twenty employees from the Corporate, Education and Property clusters and from Concorde. They moved into the centre while Casela’s team were welcoming the children and their educators for a tour of the tortoise park and the mini farm.

Whereas the children were marvelling at the goats, rabbits, guinea pigs, tortoises, deer, pigs, turkeys and other animals, Medine Volunteers were busy repainting the walls of the awakening centre and revamping its interior, notably with the design of a new reading corner.

To crown it all, when the children and their educators came back from their excursion at Casela World of Adventures, parents joined in to discover together the embellished and redynamised Centre whilst sharing in a convivial snack-time with the Group’s team, around an offer of refreshments and mini-pastries.

As a conclusion to this day of meeting and sharing, families present received large clothing donations collected by Fondation Medine Horizons.

Sylvana Moutalnankin, who leads the team of animators and educators of Caritas’ Centre d’Eveil de Saint Sauveur, dedicated to the early childhood awakening of Bambous’ young kids expressed her feelings as follows: – « How amazing to see our school so enlivened henceforth! The educational toys that we had were indeed in dire need of being renewed. Medine’s team has worked wonders through the freshly decorated walls and the supply of colourful and interesting toys, which are effectively engaging for the children. We applaud Medine Group’s beautiful initiative and its uplifting transformation our awakening centre’s environment, which will positively contribute to the children’s development. »